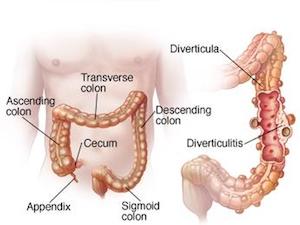 Diverticulitis is a serious condition of the intestines that is common in both men and women over the age of 40 years old. Some younger people can develop it too though. It begins as a different condition called “diverticulosis,” which is a medical term that refers to the formation of pockets along the walls of the intestines. Only when the pockets become inflamed does the term “diverticulitis” apply. This can be a bit confusing to those who are unsure how to handle their new diagnosis, so this article will address some of the causes, symptoms, and treatment options that are available.

This condition usually begins once a person is middle-aged because the walls of the intestines start to thin and weaken over time. This allows pockets to develop more easily. But the main contributor to the health problem is a lack of fiber in the diet. Fiber is important because it aids in bulking up the stools, so they can pass as a semi-solid mass out of the body. If a person’s stools are too loose, some of them will be left behind in the pockets where they will cause inflammation and swelling from all the bacteria that they contain. The main reason that most people don’t get enough fiber in their diet is because they eat mostly ready-made meals that contain little nutrition. This type of processed food has been overcooked, and it contains mostly white flour and sugar, both of which wreak havoc with the body’s digestive system.

Most people don’t realize that there is something wrong with their intestines until this condition has become quite progressive. That is because the formation of pockets in the development of diverticulosis doesn’t cause any symptoms. When the pockets become inflamed and swollen, and the disease has progressed to the stage of diverticulitis, it is common for a person to experience the following symptoms:

Pain in the lower abdomen: As the pockets in the lower intestines become inflamed and raw, a person can develop pain in their lower abdominal region, which generally worsens after eating a meal. Acidic and spicy foods seem to cause the most discomfort of all though. Most people who have diverticulitis mention that taking over-the-counter pain relievers and stomach medications does little to relieve this symptom. So this is often what causes them to go to the doctor to get treatment.

Embarrassing gas: The fermentation and decay of waste in the lower intestines increases the production of smelly gas. This symptom also contributes to pressure in the abdominal region. So sometimes people dismiss this symptom because they think that the gas is just a normal part of the digestive process. The problem is that it worsens over time.

Small, round stools that resemble pellets: When a person doesn’t get enough fiber in their diet, their stools don’t clump together properly. This causes the stools to be small and round, like those of a rabbit. It is common for a person to feel as if they aren’t able to pass all of the stools out of the body without straining significantly. And this creates bloating and an uncomfortable sensation of feeling the need to go to the bathroom more often.

Fever: A low-grade fever may develop from the body’s immune system reaction to the increased amount of bacteria in the lower intestines. Unfortunately, this is also a sign that the body is increasing the inflammation as a way of defending it against what it perceives to be an attack on the person’s health. The fever is usually accompanied by a general feeling of malaise and fatigue, which could be mistaken for flu-like symptoms. The difference is that this symptom doesn’t go away over time.

Weakness: When waste sits inside the intestines for too long, this allows the bacteria to start leaching through the thin intestinal walls. And it takes everything that the body has to start fighting the infection off. The immune system response diverts energy for this process, so a person may feel lethargic and weaker than usual. It is best not to drink caffeinated beverages if this occurs because they will only worsen the symptom.

The following are the three main treatment options that are available for those who have diverticulitis, but the use of each of them depends on the severity of a person’s condition:

Surgery: Unfortunately, there is no way to reverse the formation of pockets along the walls of the intestinal tract. And most doctors agree that there is no cure for diverticulosis, which proceeds diverticulitis. So there is no way to prevent diverticulitis from occurring by making the walls of the intestines smooth again. If any of the pockets tear though, a patient will have to be taken into emergency surgery to prevent sepsis from occurring from the possible spread of feces leaking into the body through the tear. More often than not, a section of the intestines is taken out during the procedure, especially if the doctor notices that there are any other severely damaged portions that could tear in the near future.

Healthy Diet: It should be mentioned that treating diverticulitis requires the full commitment of the patient because the condition cannot get better without drastic changes to a person’s lifestyle. The most important part of the healing process is making the switch to a high-fiber diet. Fresh fruits and vegetables, lean meats, and whole grains have to be eaten instead of junk food that is high in sugars and starches. Those who are struggling to get enough fiber in their diet may require fiber supplements or powders that can be taken along with each meal. Sometimes, the sudden increase in extra fiber can lead to constipation, so doctors often suggest that their patients slowly increase their fiber intake a little bit each day until they reach the maximum amount that is needed. They also have to drink plenty of water to help flush the stools out.

Diverticulitis that has gone untreated for a significant amount of time is dangerous because the stools that are left in the pockets along the intestinal walls will start to ferment and decay. This increases the amount of bacteria that is in the intestinal tract. And since the intestinal tract is so thin, some of the bacteria can escape through osmosis. That means, a person can get very sick as it makes its way into the bloodstream and surrounding organs. So one of the most important treatment options is the use of antibiotics to clear up any infection. Anti-inflammation medications are also needed to reduce the swelling. Inflammation that has been going on for too long is dangerous because the body starts attacking healthy tissue, which ends up worsening the condition. Those who prefer the more natural route to treating their diverticulitis can use plant-based supplements that are soothing and helpful in reducing inflammation instead, such as mint, licorice, and turmeric.

In conclusion, although diverticulitis is a serious condition of the intestines, it can often be successfully treated. Many people who carefully follow their doctor’s orders are able to reverse the inflammation, swelling, and spread of bacteria throughout their body. Although diverticulitis has never been shown to be caused by a person’s genetics, those who have close family members who have developed the condition may want to consider switching to a healthy, high-fiber diet too as a way of helping to prevent them from developing it. And remember, this condition can only be properly diagnosed by a trained physician. So no one should ever attempt to self-medicate with herbs, supplements, or antibiotics because they could cause more harm than good.