What is Giardiasis? – Causes, Symptoms and Treatment

Find out how the giardia parasite (Giardiasis) might cause you permanent damage! 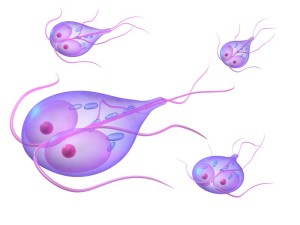 They’re almost pretty aren’t they? Until they are inside your intestines where giardia can cause intense IBS symptoms and may cause long term damage.
© Can Stock Photo

Giardia diarrhea is caused by a parasite called giardia intestinalis, or giardia lamblia.

I wrote on another page about how certain kinds of infections can lead to IBS, but I wanted to cover this little beastie, because I think this is how I got irritable bowel syndrome.

What is a giardia infection?

A giardia infection is called giardiasis by doctors. It used to be called beaver fever, because it was believed that beavers were the transmitters of the disease.

As it turns out many animals can transmit a giardia infection (for instance, dogs can get it). Humans usually get it by drinking or otherwise swallowing contaminated water (like brushing your teeth with the water from a stream, like I did).

Many people can get the parasite and have no symtoms, for others, the symptoms usually show up after about two weeks.

The main symptoms of giardia are intense watery stool and bowel cramps, that can come and go for a few weeks. Here’s the full list of common symptoms:

Hmm. Those sound a lot like IBS symptoms. And yes giardia diarrhea smells particularly nasty. Sorry to mention it, but I thought you should know, if that’s what is happening to you.

How giardia leads to IBS:

This isn’t really known, but it is thought that, like other infections, giardia causes changes to the way the nerves of the bowels work. Somehow this leads to visceral hypersensitivity, bowel cramps, diarrhea, bowel spasms, trapped gas, and constipation.

In other words giardia can lead to chronic IBS symptoms.

Research into how it actually happens is ongoing.

I never got my giardia diarrhea treated. I didn’t know how serious it was.  Treatment is simple, and I’m sorry I didn’t have it.  Don’t make my mistake.

The standard treatment for giardiasis is a prescription for antibiotic medicine. The commonly used antibiotic for this parasite is Metronidazole (I have no idea how to pronounce THAT :).

When to see a doctor:

If I were you, and I thought I had giardiasis, I’d seek treatment right away.

If you don’t have IBS, you might get it. And who knows, it might make your IBS worse if you already have it.

Whether you think you have a giardia infection or not, you shouldn’t go more than a week with the symptoms mentioned above (at least in my amateur opinion).

You can get dehydrated or have other complications.

Get help if you need it, even if it means talking about your bathroom problems!

What about you? did you ever have giardiasis?

Do you think it led to your IBS symptoms?

Let people know in the comments section below!