What is a food elimination diet? 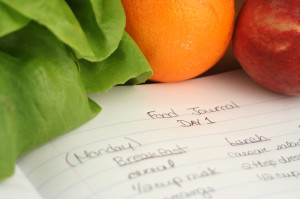 A food diary can be a powerful tool for helping IBS and other conditions.
© Can Stock Photo

A food elimination diet can help you find foods that are causing health problems. Finding and removing problem foods has helped some people reduce or even eliminate symptoms of IBS, eczema, fibromyalgia, chronic fatigue syndrome (CFS), and mental health issues like depression and ADHD. Though I admit that going on a food elimination diet and tracking foods in a food diary is a pain in the, um, neck, it’s important. ` have problems with certain foods. Finding out which foods give you trouble, and removing them from your diet, can REALLY help cut down on your IBS symptoms. Doesn’t that makes it worth the aggravation?!

Some important notes before starting a food elimination diet:

First of all, it’s best to do a food elimination diet with medical supervision, particularly if you’re ill or if you may be dealing with food allergies. Food allergies can cause a dangerous (even fatal) condition called anaphylaxis or anaphylactic shock. You MUST have any food allergy or food sensitivity testing done BEFORE starting a food elimination diet (unless your medical professional recommends otherwise). Your body may stop showing signs of allergies or sensitivities if you stop eating the problem foods. Then the tests won’t be able to find your problem foods!

Here is how a food elimination diet works:

The importance of a food diary.

During this process you MUST keep a diary of the everything you eat or drink. This is IMPORTANT! A food may make you sick right away, but it can also take a few days depending on how YOUR digestive tract works. By then it will be too hard to figure out without a food diary. I guarantee that if you don’t keep this diary the food elimination diet won’t work!

The following is a sample food elimination diet for IBS and food intolerance. It’s not for allergies, though if you’re allergic to one of the foods on the list it could help with that. As you read the list, don’t get too upset! You don’t need to be on a food elimination diet forever; though if you find a food that makes you sick you’ll need to avoid it. Don’t lose hope. Feeling better is worth it!

Caffeine – Coffee, tea and many soft drinks. Known to cause cramps and diarrhea.

Dairy – The most common food intolerance.

Wheat – Some people are allergic to wheat, other people are sensitive to a protein in wheat called gluten. Remember, wheat is in bread, flour, spaghetti, macaroni, etc.

Sugar – Which can feed a yeast overgrowth (candida).

Spicy foods – Some people with IBS have extra nerve receptors for “hot” foods, which can lead to pain and cramping.

Carbonated beverages – known to cause gas, which can set off an IBS attack.

Possibly Eggs – These are high fat, and some people are sensitivity to them.

Special note: Beef and pork are often listed as foods that cause allergies, or sensitivities. They are also often high in fat which can be an IBS trigger. But they are often left in the IBS food elimination diets I’ve seen, so I’ve left them in this sample diet. 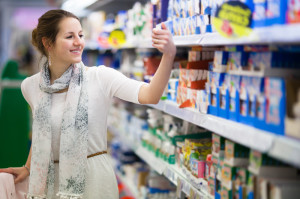 You have to be careful and check labels while you’re on a food elimination diet!

Unless you’re allergic or otherwise sensitive to them (unusual), these are the safer foods for IBS sufferers:

Lean meats – bearing in mind the note about beef and pork above.

Poultry – Chicken, turkey and such. You can do a lot with these!

Vegetables of all kinds. Not my favorite but the best thing for the human body.

Cooking oil – IN MODERATION! Grains – Brown rice and some others, like quinoa, kasha and ameranth. That’s too complicated for me though. I stick with brown rice.

Water – I’ve never liked drinking it for some reason. But it’s the best thing for you. I put a spritz of lemon in mine.

Herbal teas – too many to name.

Stevia sweetener – This is available online, and from health food stores. It’s plant based and VERY sweet! You might try it in place of sugar. 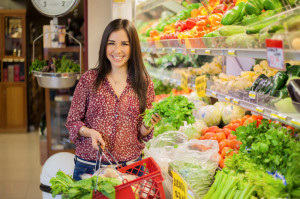 A food elimination diet usually includes a lot of HEALTHY foods. Frankly, as a vegetable wimp, this was hard for me!
© Can Stock Photo

Looking at the above lists, you’re probably feeling pretty miserable. I did. I felt deprived and picked on. But when you think about it, the foods on the “foods to eat” list is a lot healthier! That’s what people have been eating for many thousands of years. Cavemen didn’t have flour mills or sugar cane or food additives. Much of the stuff on the avoid list was never part of the human diet until recent times and then only in the “first world” nations like the US and Europe. Interestingly that’s where irritable bowel syndrome is most common. IBS is unheard of in places like Africa and other “third world” areas. In fact, IBS has been called a “developed nation” disease.

Some people feel worse for a while on the this kind of diet. Caffeine withdrawal can cause headaches, irritability, etc. and quitting junk food can cause your body to change dramatically. The flora in your intestinal tract (which help with digestion) may be out of balance with to much yeast. The yeast will be screaming for more sugar and white flour, which can make your junk food cravings worse. Then your body can go through a cleansing crisis. That’s where the bad bacteria, fungi and yeast die off, and make you feel lousy until they’re out of your system. Also, your body may take advantage of the vacation from junk food. It may do some major house cleaning and detoxification. That can make you feel pretty bad too.

Why it’s worth it!

If your irritable bowel syndrome was really a hidden food intolerance, then stopping that food may cure you! If you do have IBS, you’ll have a list of foods that you can eat that don’t cause you problems. More important, you’ll know what foods you should avoid. AND… If you’re like me, you’ll be eating a LOT healthier (even though I’d sometimes rather be eating beer and pizza). You’ll almost certainly lose weight, which a lot of people are trying to do. Watch out though if you’re already too skinny! To learn more about food intolerance… Return to Food Intolerance from the Food Elimination Diet page.